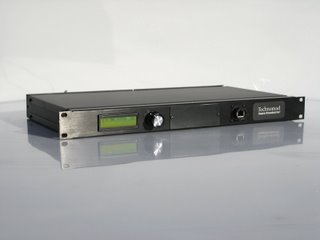 BOSTON, January 8, 2007 – Technomad today announced it is now shipping the SuperConductor, the ultimate mp3 playback and recording system for military applications. The SuperConductor represents a new benchmark in military audio by allowing users to flexibly schedule sounds and announcements for automatic unattended playback as well as play back sounds instantly to respond to emergency situations. The unit can be purchased separately or with Technomad Military PA systems (modular or turnkey) to build the most intelligible, flexible, high-fidelity audio projection system available for military base installations today.

Scheduling can be as straightforward or complex as desired; sounds can be programmed to play hourly, daily, weekly or even annually and anything in between. The SuperConductor contains a highly accurate Real Time Clock (RTC), which allows the unit to play sounds on a precise schedule. Potential applications include playing Reveille daily at 0600, hourly safety announcements (i.e., Airport announcements), local-language messages, sirens and alerts, combat simulation, training, and ceremonial music for command changes. The SuperConductor is also ideal for playing music at motivational sessions and Morale Welfare and Recreation (MWR) events.

The SuperConductor solves a host of military problems, said Karl von Kries, President of Technomad Associates, LLC. “The unit gives users a reliable way to play sounds instantly in response to an emergency or as part of a training exercise, and also let’s the user create a schedule for automatic sound playback. This is incredibly useful for scheduling the daily routine of a base or for combat simulation. And the sound quality is outstanding. The device is simple to use and install, and it will operate indefinitely once integrated into the audio rack system.

The SuperConductor features a standalone, PC-free design to eliminate all threats of system crashes or viruses. The lack of moving parts and PC-free operation gives the SuperConductor true plug-and-play capability, with no need for constant monitoring or software updates to ensure it remains in proper working order. Field recording features will soon be integrated into the SuperConductor, delivering the flexibility to record sounds on the fly.

For anyone using a tape deck, iPod, CD player, minidisk player or a computer to generate audio for a military application, we’re confident the SuperConductor will give them greater ease-of-use, reliability and functionality, said von Kries. No other product combines instant on-demand sound with simple automatic sound scheduling. We’re very pleased to introduce this unique product.